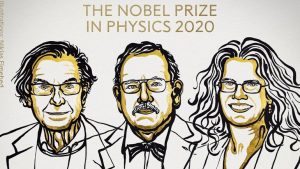 The Nobel Prize in Physics was awarded jointly to Roger Penrose, Reinhard Genzel and Andrea Ghez on Tuesday for their discoveries that have bettered understanding of the universe, including work on black holes.
Roger Penrose invented ingenious mathematical methods to explore Albert Einstein’s general theory of relativity. He showed that the theory leads to the formation of black holes, those monsters in time and space that capture everything that enters them.
Reinhard Genzel and Andrea Ghez discovered that an invisible and extremely heavy object governs the
orbits of stars at the centre of our galaxy. A supermassive black hole is the only currently known explanation.
The award comes with a gold medal and prize money of 10 million Swedish kronor (more than $1.1 million).