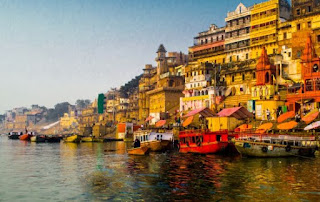 The Ganges (also known as Ganga or Gonga), is the biggest river in the Indian subcontinent in terms of water flow. The length of the Ganga is 2,510 km or 1,560 miles. The river has its origin in the Western Himalayan Ranges in the state of Uttarakhand.

The followers of Hindu religion regard the Ganges to be the most sacred of all the rivers in India. The river is revered as the deity Ganga in Hindu religion. The river also has significant historical values - a number of colonial or royal capitals like Kannauj, Patliputra (modern day Patna), Allahabad, Kara, Baharampur, Murshidabad, and Kolkata are situated on the riverbanks of the Ganges.

Discharge its water: Bay of Bengal