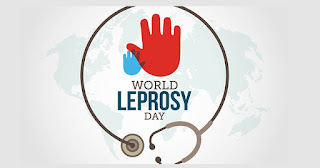 World Leprosy Day is observed on Jan 30 every year to commemorate the death of Mahatma Gandhi who was assassinated on this day in 1948.

This year theme of World Leprosy Day 2020 is “Leprosy isn’t what you think”.

This day was chosen by the French humanitarian Raoul Follereau as a tribute to Mahatma Gandhi, who helped people affected with leprosy.

World Leprosy Day is observed internationally every year on the last Sunday of January to increase public awareness of the Leprosy.


The day was initiated in 1954 by French philanthropist and writer, Raoul Follereau, as a way to raise global awareness of this deadly ancient disease and call attention to the fact that it can be prevented, treated and cured.