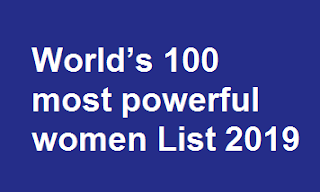 Finance Minister Nirmala Sitharaman has been ranked as the 34th most powerful woman in the world on Forbes's 'The World's 100 Most Powerful Women' list.

Other Indian women who made it to the list are Roshni Nadar Malhotra, who has been placed on the 54th spot and Kiran Mazumdar Shaw at 65th spot

It must be noted that the Finance Minister has been ranked ahead of Queen Elizabeth II who is on the 40th spot and US President Donald Trump's daughter and advisor Ivanka Trump, who is on the 42nd spot.

Rihanna at 61st spot, Beyonce Knowles at 66th spot, Taylor Swift at 71st spot, Serena Williams at 81st and Reese Witherspoon at 90th spot and Greta Thunberg at 100th spot have all been ranked below FM Sitharaman.