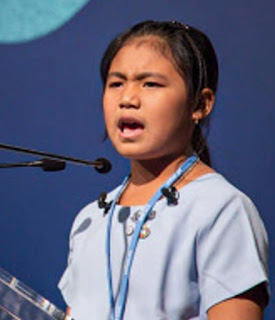 When Kangujam was just six-year-old, she got an opportunity to attend the 3rd Asia Ministerial Conference for Disaster Risks reduction 2018 (AMCDRR 2018) in Ulaanbaatar, the capital city of Mongolia.

Kangujam has travelled 21 countries and spoken at many events as a part of her movement.

Kangujam was born in Imphal but has almost always lived outside the state, especially in Delhi and in Bhubaneswar.

Kanjugam is inspired by the works of Mahatma Gandhi and Former President of India APJ Abdul Kalam.

The young activist from Manipur who has already spoken in 21 countries on climate change, gave the world a glimpse of her resolve as she urged global leaders to "act now against climate change".

She is Also Speaking at the COP25 climate conference.

Her passion towards the fight against climate change has urged global leaders to take immediate action to save the planet and the future of young children like her.