The series revolves around two star-crossed lovers Raghbir and Bani who love each other till Bani dies in an accident. Soon destiny brings Pragati in Raghbir's life. 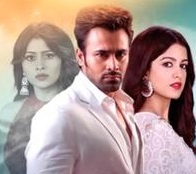