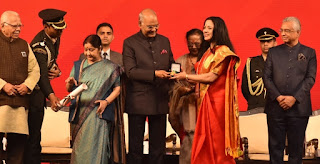 It is the highest honour conferred upon by the Indian Government to overseas Indian.

Since its launch, many deserving people of Indian origin from across the world have been honoured, which includes politicians, economists, scientists, artists and business leaders from around the world.

The PBSA is conferred every year on January 9, which is celebrated as Pravasi Bharatiya Divas (PBD).

It was chosen as the day since it was on 9 January 1915, Mahatma Gandhi (greatest Pravasi) returned to India from South Africa and led India’s freedom struggle thereafter.

The award is given by the President of India.