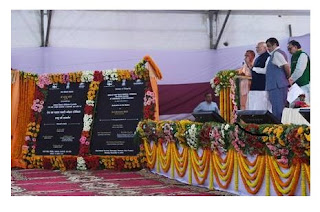 This is the second part of three multi-modal terminals (MMT) being built on the Ganges river under the Jal Marg Vikas Project (JMVP).


A multi-modal cargo terminal of Rs.290 crore has been built by the Inland Waterways Authority (IWAI) on the Ganges River at Sahibganj.

It will have 3 million tonnes (MT) of freight storage capacity per year, a stockyard and parking and berthing space for two ships.