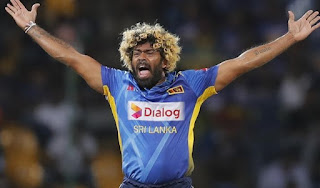 Sri Lanka's Lasith Malinga has become the first bowler to take 100 wickets in the third T20 International against New Zealand at Pallekele.

He also took a hat-trick, dismissed 4 batsmen for 4 consecutive balls and became the first bowler to take 2 hat-tricks in T20 cricket.


Lasith Malinga also surpassed Wasim Akram and set the record for most hat-trick in international cricket.

He has taken 5 hat-tricks in his international career so far.