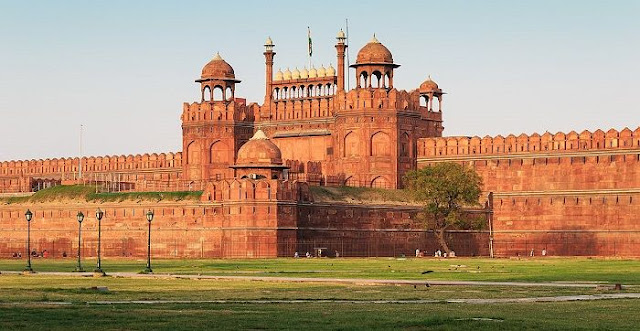 Shah Jahan, the then Mughal emperor decided to build the Red Fort as the citadel of Shahjahanabad, his new capital at Delhi. The fort, which was completely constructed in the year 1648, remained the residence of the Mughal emperors until 1857. Post the reign of Aurangzeb, the Mughal dynasty grew weaker in every aspect and that started taking a toll on the fort. When Farrukhsiyar, the ninth Mughal emperor, took over the reign from Jahandar Shah after murdering him, the fort began to lose its luster, quite literally. During his reign, the silver ceiling of the fort was replaced with copper in order to raise money. This was probably the beginning of the plunder that would go on for years to come. In 1739, Nadir Shah, the Persian emperor defeated the Mughals and took with him some of the valuables belonging to the fort, including the famous peacock throne, which had served as the royal throne of the Mughals. The weakened Mughals had no other option but to sign a treaty with the Marathas, who had promised to protect them and the fort. In 1760, when Ahmed Shah Durrani of the Durrani dynasty threatened to capture Delhi, the Marathas dug out the silver ceiling of Diwan-i-Khas to strengthen their army. However, Ahmed Shah Durrani defeated the Marathas in the third battle of Panipat and took over the fort. The Marathas reconquered the fort in 1771 and stalled Shah Alam II as the 16th Mughal emperor. In 1788, the Marathas occupied the fort and ruled over Delhi for the next 20 years before the British defeated them during the Second Anglo-Maratha War in 1803.
The fort now was occupied by the British, who even built a residence of their own within the fort. During the Indian rebellion of 1857, Bahadur Shah II, was arrested by the British and later exiled to Rangoon. With Bahadur Shah II, the Mughal Empire came to an end and this opened a window of opportunity for the British to loot valuables from the fort. Almost all furniture were either destroyed or shipped to England. Many edifices and landmarks within the fort were destroyed and barracks of stone replaced them. Many priceless possessions like the Koh-i-Noor diamond, the crown of Bahadur Shah and the wine cup of Shah Jahan were sent to the British government. After independence, the Indian Army occupied a major part of the fort before handing it over to the Archaeological Survey of India (ASA) for restoration purposes.