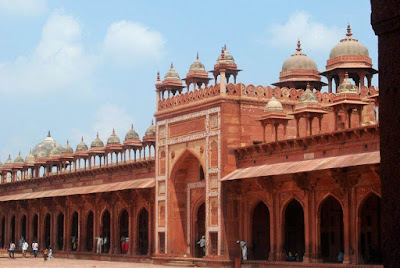 Fatehpur Sikri was the imperial city of the Mughal dynasty between 1571 and 1584. Built by the Mughal emperor Akbar, this royal city is one of a kind. The architectural grandeur of this deserted city cannot be described in words and one can only experience the aura of its magnificent edifices by seeing them.

Fatehpur Sikri was made the political capital of the Mughal Empire by Emperor Akbar from the period of 1571 to 1585. The capital was later shifted to the city of Agra. There are majestic buildings built by Akbar in Fatehpur Sikri. There is a fort in the site which is a blend of Mughal and Persian architecture. The ideal time for undertaking tours to Fatehpur Sikri is between the months of November and February. The weather is this part of the year is pleasant with sunny skies and little rainfall.