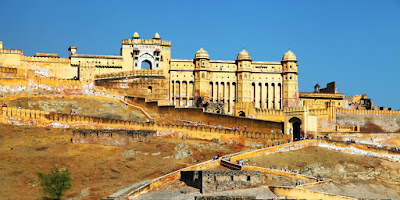 Amer Fort is the best tourist attraction of Jaipur and the sprawling complex combines both immense fortifications with unexpected beauty and charm. The fort which visitors are able to explore today dates from the 16th century and is situated on a natural ridge 11km north of Jaipur.

History of Amber Fort :
Amber was once the capital of princely Jaipur state, and the fort the residence of its Rajput rulers. Maharaja Man Singh I, who led Mughal Emperor Akbar's army, commenced its construction in 1592 on the remains of an 11th-century fort.
Successive rulers added to Amber Fort before moving the capital to Jaipur in 1727. The fort was declared a UNESCO World Heritage site in 2013, as part of a group of six hill forts in Rajasthan. Its architecture is a noteworthy fusion of Rajput (Hindu) and Mughal (Islamic) styles.