The World's longest bridge is Danyang-Kunshan Grand Bridge. It is a 164.8 Kilometer ( 102.4 mi) long. The bridge is located on the rail line between Shanghai and Nanjing in East China’s Jiangsu province. 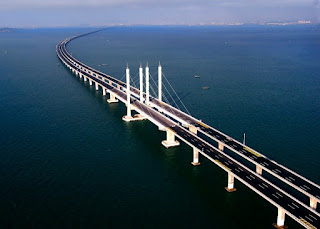 Danyang–Kunshan Grand Bridge
It was completed in 2010 and opened in 2011.China constructed the Danyang–Kunshan Grand Bridge in just 4 years, employing 10,000 workers, at a cost of about $8.5 million. It crosses low rice paddies, part of the Yangtze River Delta, with just a few miles of the bridge actually crossing the open water of Yangcheng Lake in Suzhou. The bridge averages about 100 feet (31 meters) off the ground. 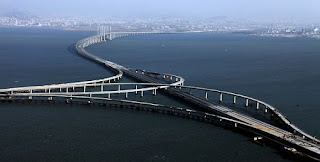 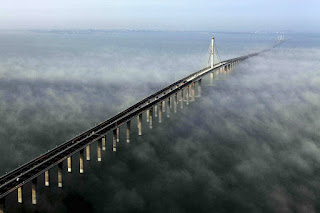 China it seems is either the best at growing long bridges, or the only country who wants bridges that long. The top three longest bridges in the world are all in China. Second place goes to Tianjin Grand Bridge (113,700 m) and third to Weinan Weihe Grand Bridge (79,732 m).